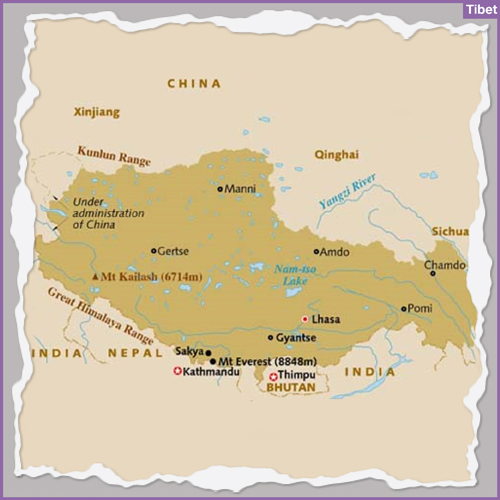 Tibet, known as the “Roof of the World” is located in the south-west of China who has occupied it since 1950, bordering with Nepal who it shares with Mount Everest, its historical territory would make it the 10th largest nation in the world.Home to the Tibetan Buddhist monks and the birthplace of The Dalai Lama possibly one of the most well-known people on the planet, it has a history dating back over 2,000 years. The scenery is stunning, the history and culture enchanting and the people are warm and friendly. The capital, Lhasa, is site of the hilltop Potala Palace, once the Dalai Lama’s winter home, is one of the worlds architectural wonders is a place of pilgrimage for millions, and has to be at the top of every tour itinerary.

Topography and Climate
Tibet is the highest region on Earth, with an average elevation of 4,900 metres (16,000 ft.) Because of this, the difference in between daytime and night time temperatures can be dramatic. Tibet has little rain being severely dry for nine months of the year, but the Indian monsoon can have some effect in the east of the country. April to October is considered the best months to visit, as other months can be very cold. The mighty Tibetan Plateau with its numerous high altitude lakes is also the source of many great rivers including the Yangtze, Mekong, Yellow and Indus which has earned it the nickname the ‘Water Tower’ of Asia.

GENERAL INFORMATION
Getting into this secretive country is strictly controlled to certain times of year but we are able to organise the Tibet Entry Permit and other essential passes and visas by arrangement with our destination travel partners. Once arriving in Tibet after a short period of acclimatisation we are sure are clients will find the effort worth it, but additional care should be taken as the high altitude makes the air rarefied which increases the possibility of altitude sickness and sunburn from ultra-violet rays.

ACCOMMODATION
The standard of accommodation in Tibet particularly outside of Lhasa which has a number of luxury hotels is not very good by western standards. For example, in Shigatse, Gyangtse, Tsedang and Nyingchi, the highest standard is 3*and in other small cities and remote areas, they are very basic.

The best hotels in Lhasa are the Brahmaputra Grand Hotel,recognised as the first 5* hotel but like the Four Points by Sheraton, Jardin Secret Hotel, Manasarovar Grand Hotel and the St. Regis Lhasa Resort we consider them 4* hotels. These hotels are open all the year around and generally offer very good services with western style breakfast, but the stand out hotels are the luxurious Shangri-La Lhasa and the Intercontinental Lhasa Paradise. 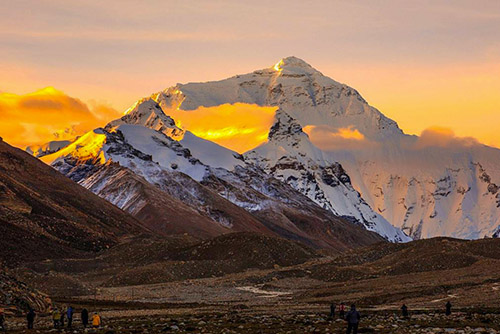 MOUNT EVEREST EXPERIENCE
Mount Everest, the worlds most famous and highest mountain which according to recent official figures is 8,848 m (29,029 ft.) above sea level. Known as Sagarmāthā by the Nepalese and Chomolungma by the Tibetans the international border between Tibet (autonomous region China) and Nepal runs across its summit point. Everest was given its official English name by the Royal Geographical Society in 1895 and was first climbed by Edmund Hillary and Tenzing Norgay in 1953. Since that first ascent, the mountain has continued to attract climbers from all over the world. Mount Everest has two main climbing routes, the “standard route” from the southeast of Nepal and the other from the north in Tibet.A major tourist attraction visits to its base camp and foothills with accommodation are often included in travel itineraries linked to holidays and tours in both Nepal and Tibet.

A 2-Day “Golden Route” tour extension is available on request; this includes a visit to the Mount Everest Base Camp which can be higher than some of the highest mountains. The tour extension, depending on time of the year and the relevant permit, includes a visit to the Rongbuk Monastery, the highest monastery in the world; a perfect location to take great photos of the front face of Mount Everest and witness the marvelous sunrise on “the peak of the world”. During November to April the overnight accommodation is provided at Rongbuk Guest House and during May to October at the Tibetan Tents Camp; clients that book this tour should be aware that the accommodation is very basic and only dormitory type beds are available at both locations.

TWIN CENTRE TOUR
Lhasa to Kathmandu, details, dates and costs of this spectacular 8-day journey from Lhasato Kathmandu in Nepal through the foothills of Mount Everest is available on request.

Qinghai-Tibet Rail Journey, this 13-Day amazing rail journey over the Qinghai-Tibet Plateau starts in Xian following a 3-Night luxury city break with private tours before joining the Qinghai-Tibet train in Xining the capital of Qinghai Province. The 1200 mile overnight 20-hour rail journey to Lhasa the capital of Tibet is known as the “Sky or Heaven Road”. The railway line is recognised as being the world’s highest and the longest plateau railway,with the worlds’ highest rail station and tunnel built on permafrost, and having the longest plateau tunnel and railway bridge. The journey from Xining, which also connects to several major cities in China,passes through Golmud, the Kulun Mountain Pass, Tuotuohe Town the origin of Yangtze River, over the Tanggula Mountain Pass and Changtang Grassland with views of the Hoxil Nature Reserve and Tsonag Lake make up a rail experience like no other.

Due to the altitude when the train heads up to Qinghai-Tibet Plateauoxygen is emitted to the whole cabin via an air pressure control system to make it feel as traveling at low altitude. There are three types of coaches on the Tibet train, but ourrail tour is based on the first class soft-berth sleeper, with 4 beds, 2 on each side of the sleeping berth car, one-above-the-other. Private Oxygen masks are provided to every passenger whatever tickets they have and in the sleeping berth car there is an oxygen supply and mask.

Tibet – on the Roof of the World, this 13-Day “Golden Route” of Tibet tour starts in Beijing with a 4-Night luxury city break that includes private tours and visits to the main attractions before joining the flight to Lhasa. The “Golden Route” tour features tours of Lhasa, Tsedang, Gyantse and Shigaste with visits to the major attractions which will provide a wonderful insight into Tibetan culture, in this somewhat secretive country, whilst travelling through and over some of the world’s most unique landscapes.

Lhasa, the capital and largest city in Tibet is generally recognised as the holiest city in the world. The principal entry point and hub of Tibet tourism this amazing city is a treasure trove of palaces, monasteries and temples. The “”Place of the Gods” located deep in the Himalayan Mountains, its hilltop Potala Palace once the Dalai Lama’s winter home,is one of the worlds architectural wonders, regarded as the symbol of Tibet its a place of pilgrimage for millions. The Potala Palace,the Norbulingka Palace once the summer residence of the Dalai Lamas and the Jokhang Temple the spiritual centre of Tibet are all UNESCO World Heritage Sites. At the centre of the city and on the pilgrimage circuit is the exotic Barkhor Street with its ancient Tibetan architecture.Lhasa also has several of the most influential Tibetan monasteries these include the Drepung Monastery, Sera Monastery, Ganden Monastery and Tsurphu Monastery.

Tsedang, one of the largest cities in Tibet some 100 miles southeast of Lhasa its located in the middle and lower reaches of Yarlung Tsampo Valley between the Himalayas and Kailas Range. A fertile region with spectacular ranges, beautiful lakes and springs it’s understood to be the birthplace of the earliest Tibetans, “the cradle of Tibetan Civilisation”. Close too many of the Shannan region attractions that include the Yumbulakang Palace the oldest in Tibet built over 2000 years ago, the 8th century Samye Monastery the very first to be built in Tibet, the tombs of the Tibetan Kings and Lhamo Lhatso Lake are amongst many others.

Shigatse, or Xigaze the second largest city in Tibet some 150 miles southwest of Lhasa is the gateway to Mount Everest. Shigatse meaning “the fertile land” has played an important part in Tibetan history. The city overlooked by the Dzong which was destroyed in 1961 after the 1959 uprising was rebuilt on a smaller scale at the same location in 2007. The Shigatse Prefecture is renowned for its spectacular monasteries of different sects of Tibetan Buddhism these include the Sakya Monastery, the Palcho Monastery, the Rongbuk Monastery and the largest, the Tashilhunpo Monastery, the traditional seat of successive Panchen Lamas, one of two highest leaders of Tibetan Buddhism.

Gyantse, in the Nyangchu Valley is on the trade route between India and Tibet was once a political, economic and transportation centre. Honoured as the “City of Hero” after it ran out of food and ammunition during the British army invasion in 1904; its whitewashed old town is a famed historical and cultural place. Sitting on the Friendship Highway,it now plays an important role in connecting Lhasa and Kathmandu. Amongst its not to be missed attractions is the Palcho Monastery and its awe-inspiring Gyantse Kumbum a 32m-high chörten with a crown-like golden dome. Other attractions include the Pala Manor the former residence of a noble family and the well preserved Gyantse Dzong (Fortress) with its historical significance.