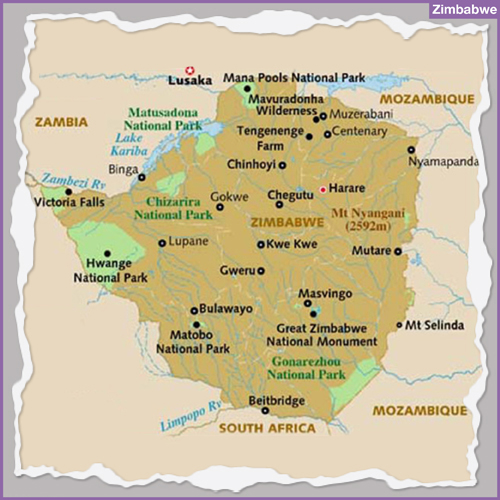 Zimbabwe,has for many years a popular tourist destination due to its dramatic landscape and diverse wildlife, much within its parks and game reserves and safari areas. Although the country has gone through a gradual economic and social decline in recent years, they still present the visitor with experiences and panoramas that are unrivalled both in Africa or anywhere else in the world. On the mighty Zambezi River, there is Victoria Falls, and downstream are the Matusadona and Mana Pools National Parks, home to hippos, rhinos and birdlife. In the Eastern Highlands a mountainous area near the border with Mozambique from World’s View, it’s possible to see places as far away as 60–70 km on clear days. Zimbabwe is also unusual in Africa in that there are a number of ancient ruined cities built in a unique dry stone style.

Topography & Climate
Zimbabwe is a landlocked country with an elevated central plateau stretching north from the southwest. In the extreme east is the mountainous area known as the Eastern Highlands, with Mount Nyangani at its highest point. These highlands are renowned for their great natural beauty, with famous tourist destinations such as Nyanga, Troutbeck, Chimanimani, Vumba and Chirinda Forest at Mount Selinda. The country’s rainy season generally runs from late October to March. Being a typical tropical climate there are local variations. Southern areas are arid and hot whilst parts of the central plateau get frost in winter.

Luxury accommodations we currently recommend are:

The Elephant Camp, this wonderful camp close to the Victoria Falls is a destination unto itself. Its exclusive location , on a private concession by the Masuwe River with spectacular gorge-facing accommodation this special camp with 12 tented suites, resplendent with private lounges, outdoor showers and plunge pools takes luxury to whole new levels is perfect for honeymooners. The classy main lodge holds host to buffet breakfasts and candlelit dinners that are created with fresh ingredients and herbs grown in the lodge garden. This is a spectacular location it can be combined with other elements and destinations within Arica or simply a stand-alone a honeymoon destination. During a stay in the camp you can embark on a range of unforgettable activities, from game drives, elephant meets, bird walks, to drinks overlooking the Batoka Gorge and even interact with Sylvester the ambassador cheetah

Victoria Falls Town,is situated in the province of Matabeleland North, Zimbabwe. It lies on the southern bank of the Zambezi River at the western end of the Victoria Falls and is the gateway to the massive waterfall of the same name. It is connected by road and railway to Hwange (109 km away) and Bulawayo (440 km away) in the south-east. The town originally started as a settlement 1901 when the possibility of using the waterfall for hydro-electric power was explored, and expanded when the railway from Bulawayo reached the town shortly before the Victoria Falls Bridge was opened in April 1905. A small town verydependent on tourism has been centre for the Victoria Falls tourism since the 1930. On many wish listsit has several luxury hotels and stunning lodges within the immediate vicinity.

The Victoria Falls, is one of Africa’s, if not the world’s great attractions. Located in southern Africa on the Zambezi River at the border of Zambia and Zimbabwe it was described by CNN as one of the Seven Natural Wonders of the World.Discovered in 1855 by the famous explorer David Livingstonewho wasthe first European to cross Africa from south to north he named it after Queen Victoria. Being struck by its beauty, in 1857 Livingstone wrote “no one in England can even imagine the beauty of this scene, its most probably angels are admiring the scenery while flying nearby”. For centuries local African tribes had a sacral fear of the waterfall which can be heard from a distance of 40 kilometers, its spray and mist from the falling water rises to a height of over 400 meters and can be seen from a distance of 50 kilometers. So it’s understandable that the local tribes used to call the waterfall Mosi-o-Tunya “The Smoke that Thunders”. A UNESCO World Heritage Site, it is neither the highest nor the widest waterfall in the world but is classified as the largest, based on its combined width of 1,708 metres and height of 108 metres resulting in the world’s largest sheet of falling water.

The Victoria Falls is effectively made up of five different “falls”. The Devil’s Cataract, Main Falls, Rainbow Falls and Horseshoe Falls are on the Zimbabwean side and The Eastern Cataract on the Zambian side. The Devil’s Cataract “falls” are about 70 metres deep and derive the name from an adjacent island in the Zambezi River where it’s said natives used to conduct sacrificial ceremonies, considered a “devilish” practice by the missionaries, resulted in the name of the area. The Main Falls with a wide curtain of water thundering into the gorge below is the most majestic section which throws out a magnificent spray that constantly nourishes the areas evergreen forest.The Horseshoe Falls are horseshoe shaped and 95 metres deep, this section usually dries up at the height of the dry season between October and November. The Rainbow Fallsfrom where a beautiful rainbow can been seen is 108 metres deep, the deepest of the whole series of “falls”. The Eastern Cataract “falls”are entirely on the Zambian side of Victoria Falls, 101 metres deep, they are the second deepest and have a stunning view from the Zimbabwe side that has 15 viewpoints. Most notably Chain Walk with 73 steps descending into the gorge and offers a clear view of the beginning of the gorge and the Main Falls – the David Livingstone Statuewhich faces eastwards toward the Main Falls offers an uninterrupted view of theDevil’s Cataract.

Zambezi National Park, is located upstream from Victoria Falls on the Zimbabwean side of the Zambezi, which with Victoria Falls National Park covers an area of 56,000 hectares.The northern border of the Park is formed by the Zambezi River that for much of its lengthalso forms the border between Zimbabwe and Zambia. The river with a large variety of fishis particularly famous for its bream and fighting tiger fish. These national parks are home to the Big Five: elephant, lion, buffalo, leopard and white rhinoceros and a wide variety of larger mammals that include spotted hyena, wild dogs, eland, zebra, giraffe, kudu, waterbuck, impala, herds of sable antelope as well as many of the smaller species of game. Within the park are two main game-viewing sections: the Zambezi River Game Drive, an extensive network of roads along the river accessed through the main gate of the Park, and the 25 kilometre Chamabondo Game Drive in the southern part of the Park, which begins about 5 kilometres outside of Victoria Falls town. Nestled within the boundaries of the Zambezi National Parkis a Victoria Falls Private Game Reserverecognised for Intensive Protection Zone (IPZ) for Black Rhino and since implementing a Black Rhino monitoring and breeding programme the population has flourished to the point that they have been able to supply Black Rhino to other intensive protection Zones for restocking.

Victoria Falls will be the start or end of a luxury rail journey that links up with South Africa’s iconic Blue Train and Cape Town; , details of this upcoming Rail tour will be available from this link shorty.