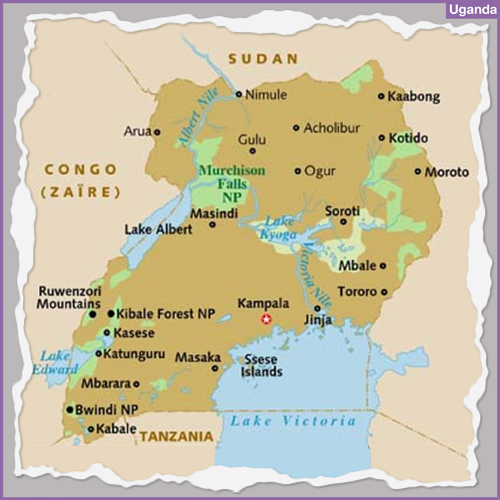 The landlocked Uganda is the ‘Pearl of Africa’ a stunning country with beautiful scenery, friendly people and breath-taking wildlife that makes the perfect holiday destination for anyone with an interest in Nature. Its ten national parks displaying some of the best wildlife East Africa has to offer. The Rift Valley landscapes and tropical forests make dramatic backdrops to an extensive variety of flora and fauna. Unrivalled on the continent as a bird watching destination with over 1,000 species of birds – several of which are found nowhere else on the planet. It is also home to 13 types of primates including over half of the world’s endangered mountain gorillas and our closest relative – the chimpanzee.

Topography and Climate
Uganda lies between the eastern and western sections of Africa’s Great Rift Valley. On its southern border lies Lake Victoria, the largest lake in Africa and the second-largest freshwater inland body of water in the world and the start of the mighty River Nile. There are numerous mountainous regions along its borders, the heavily forested slopes providing the perfect habitat for many of the world’s primates. Uganda has a tropical climate, with temperatures ranging from 21-25°C, apart from in the mountainous areas, which are much cooler. Most regions experience heavy rain between March and May and October and November making the drier months the best time to view the wildlife which is when they concentrate around water sources.