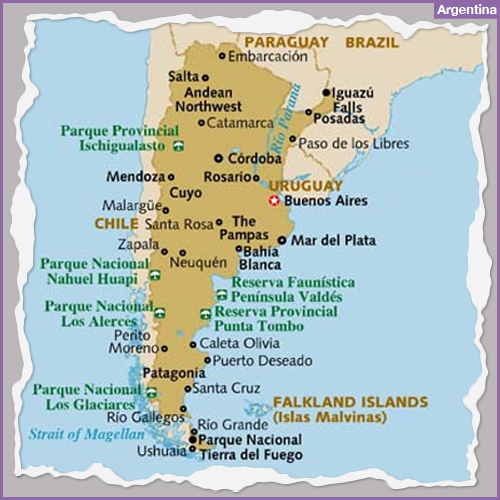 Across the vast landscape are glacial lakes, the Andes mountains, a magnificent Atlantic coastline and Pampas grassland, the traditional grazing ground of its famed beef cattle. The cosmopolitan capital, Buenos Aires, is centred on the Plaza de Mayo, lined with 19th-century stately buildings.

Topography and Climate
Argentina, the eight-largest country in the world and second-largest in Latin America, encompasses a wide range of climates across four seasons, reversed, of course, from those of the northern hemisphere.

GENERAL INFORMATION
Argentina, with thanks to its enormous size, encompasses an incredible array of terrains. From the mighty Iguaza Falls in the subtropical north to the rich Pampas grasslands of its central region, the Patagonia Steppes in the south and end-of-the-world Tierra del Fuego, Argentina is a natural wonderland. There are mirror-esque lakes hidden among the soaring peaks of the Andes, not to mention the lush tea plantations, sweeping salt flats and windswept palm groves. With diverse nature comes just as diverse wildlife; depending on where you are, in Argentina you can encounter howler monkeys or penguins, armadillos or flamingos, pumas or marsh deer. The list goes on.

As for the cities, Argentina does colonial as well as it does cosmopolitan. In fact, in some cities such as capital Buenos Aires, the two are harmoniously combined. Salta, however, is pure colonial charm and the starting point of the famous rail route ‘Train to the Clouds’ – a must for rail enthusiasts and scenery lovers alike. Then, there’s Ushuaia; aside from being the southernmost city in the world, which it seems is a reason in itself to visit, it has an interesting history as a penal colony and is now a missionary base and major tourist town, its port having become a gateway to a variety of Antarctic cruises.

ACCOMMODATION
The list below is of carefully selected character, boutique, luxury hotels and resorts we recommend, including those featured in our holiday tour itineraries. All are reviewed for quality and service regularly and the websites links should prove to be helpful, but we will happily discuss the individual merits of each during the booking process. Please be aware that we do not make “hotel” bookings on a stand-alone basis, we only book them as part of a travel package, or as an addition to an existing booking which enables us to use the best rates available at the time.

Mendoza, is renowned for its excellent selection of wine is rated amongst the world’s best wine growing regions due to its high altitude, volcanic soils and proximity to the Andes Mountains. This is the home of the increasing popular Malbec, although the region produces may other sought-after varieties. The Mendoza region is located in the mid north west of Argentina and has a climate that also favours the growing of fruit and production of honey.

The World of Travel is slowly starting to open up again, and we want you to know we’re here on 020 7118 2119 to help you plan your next trip. The pandemic has forced many of us to adapt to new ways of communication, and we are pleased to offer our clients video consultations via Zoom, Skype and the like, so you have the comfort of knowing who you’re  talking to.

We’re also working on a brand new website to showcase our amazing range of travel experiences. If you would like us to notify you when this is up and running, please subscribe here.